While emoji is a much more frequently used term these days, let’s not forget about where it all began with the original emoticon. 🙂 We are excited to bring you a three-part series on the evolution from emoticon to emoji and beyond!

In Part I, we will dive into the history of the emoticon and the rise of the emoji which will take us from the United States to Japan. Parts II and III will focus on emoticons’ impact on popular culture and the current business landscape. According to Vyv Evans, Professor of Linguistics at Bangor University, over 6 billion emoji were sent every day last year in world of 7 billion people. Let that sink in.

Is it any wonder large corporations are studying this cultural phenomenon? With the Millennial Generation and Generation Z being notoriously difficult to appeal to, emoji may just be the way to best reach them. These funky little images may as well be a language of their own…

So, where did it all start?

Let’s travel back in time for a moment. The year is 1982 and the place is Carnegie Mellon University. The Language Technologies Institute and Computer Science Department was beginning to use online bulletin boards frequently as a way to communicate. One problem that kept arising was that some people would not always understand sarcastic posts and would post a lengthy response to the matter.  Scott E. Fahlman had the idea to create a “joke marker” and the “sideways smiley face” was born. 🙂 It was a great way to show humor, an emotion that is often lacking when there is only text on screen. Fahlman recounts:

“This convention caught on quickly around Carnegie Mellon, and soon spread to other universities and research labs via the primitive computer networks of the day.

Within a few months, we started seeing the lists with dozens of “smilies”: open-mouthed surprise, person wearing glasses, Abraham Lincoln, Santa Claus, the pope, and so on. Producing such clever compilations has become a serious hobby for some people.  But only my two original smilies, plus the “winky” 😉 and the “noseless” variants seem to be in common use for actual communication.”

Surely anyone in the United States who was online throughout the 90s is quite familiar with this sideways smiley face. Whether through message boards, instant messenger programs, or video games, it’s not hard to remember a time when these simple symbols reigned supreme. Let’s head now to Japan to see how these simple smilies became the emojis seen today.

The Rise of the Emoji

Emoji were originally created in the late 1990s by Shigetaka Kurita, an employee at a Japanese telecom company, in an effort to differentiate its pager service from competitors (Source & 2). Kurita turned to manga, Chinese characters and street signs for inspiration. He was looking for symbols that convey thoughts and emotions much like Fahlman with his sideways smiley.

As tech giants Apple and Google looked to enter the Japanese market in the mid 2000’s, they realized they would need to adapt to the culture present there (link a localization blog post?). Emoji had become wildly popular in Japan at this point so the companies realized they would need to accommodate this, even if only for use in Japan. Hence, the addition on the emoji keyboard, which, once discovered in America, absolutely took off.

Cultural Confusion – What is with THAT emoji?

Understanding that the emoji world originates in Japan begins to shine light on those little pictograms that don’t always make sense. For example, the popular pile of poo that everyone seems to use, but wonders why it is even there. In Japan, a pile of poo is considered good luck. Kin no Unko (The Golden Poo) is a play on words in Japanese. The word for poop (unko) starts with the same ‘oon’ sound as a completely unrelated word that means ‘luck’. Puns such as this are very popular within the culture.

Another example is the praying hands emoji. Most Western cultures attribute it to religious seminary. However, it originates from the Japanese culture where it is common to place your hands together and bow as a please and thank you to somebody. 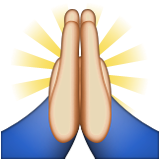 If you’ve ever been confused by emoji, you are certainly not alone! Consider American idioms such as “a penny for your thoughts” or “curiosity killed the cat”. If a business was to use this in their marketing materials for Spain and have them translated directly, it wouldn’t make sense to the people of Madrid because that phrase, with the meaning we attribute to it, doesn’t exist there. At least not in those exact words. When working with a foreign country, cultural customs need to be taken into consideration. This is true even when working within the same country. What works well for the Hispanic market in New York, comprised mostly of Puerto Ricans and Dominicans, will probably not be the best fit for the Mexican community in Southern California.

Emoji add another problem to this global landscape – they are pictures, not words! This leaves them wide open to varied interpretations.

The Atlantic – Evolution of the Emoticon